GtoPdb and  its precursor IUPHAR-DB have been capturing the structures of pharmacologically relevant ligands since 2005.  The fig.1. snapshot below  shows the approved drug section of our eight-category ligand classification 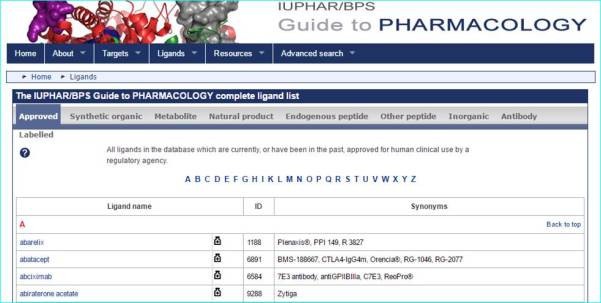 As an active collaboration with the  PubChem team, we have submitted our ligand records for every GtoPdb release since  2012.  For the current release of 2016.4 the query  (“IUPHAR/BPS Guide to PHARMACOLOGY”[SourceName])   retrieves 8674 Substance Identifiers (SIDs)  and  6565 Compound Identifiers (CIDs). The excess of 2109 SIDs is accounted for by antibodies, small proteins and large peptides that cannot form CIDs.  At just over 92 million CIDs from 473 sources, a range of property filters and full Boolean operations for combining query sets,  PubChem provides an opportunity to “slice and dice” our ligand set in detailed, comparative  and informative ways.  A set of results is shown below.

The utilities of these intersects are outlined below (in order of counts):